Rosemary herb is a sweet scented evergreen shrub which grows upto two metres high. Its leaves are narrow and resemble curved pine needles. They are green on top and grey underneath. The small pale blue flowers grow in little clusters up the stems.

Dried leaves of rosemary are used for commercial purposes. Dried herb is brownish green in colour. The leaves have a tea-like fragrance. Crushed rosemary, however, has spicy camphoraceous aroma and a pungent, bitter taste.

Rosemary herb has long been regarded as the herb for remembrance. Mystically, it symbolises loyalty, love and inmortality. It was once believed to strengthen the heart as well as memory. 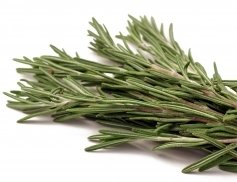 The Greeks and the Romans prepared a fragrant distilled water from the flowers and inhaled the odour so that the evils were destroyed from the mind and the memory no longer played tricks.

In ancient Greece, students preparing for examinations threaded sprigs of rosemary in their locks to induce clear thinking and a good memory.

Rosemary herb is a native of southern Europe and grows wild on dry rocky hills in the Mediterranean region. It is cultivated across in Yugoslavia, Spain, Portugal, and the U.S.A.

In India, it is cultivated in gardens in cool climates for its pleasantly fragrant leaves. It is suitable for cultivation in the temperate Himalayas and Nilgiri hills which have dry to moderately moist climate.

Dried rosemary leaves, on fractional distillation, yield 1 to 2 per cent of a volatile oil which is used in perfumery and medicine.

Rosemary is an antidote to mental fatigue and forgetfulness. A tea made from the herb is a good natural remedy for bringing added mental agility.

It is believed that if the crushed leaves of rosemary are inhaled with the eyes closed, the mind becomes clear as the vapour courses through the brain cells.

The plant has been found useful in dyspepsia, that is, indigestion and stiffness in the stomach. It is specially valuable in the digestion of starchy foods and vegetables like egg-plant and lima beans besides rich meats like pork, beef and lamb.

Rosemary is formally recognised as a drug in some of the pharmacopoeias. It is mildly irritant and is used to relieve flatulence.

Rosemary oil induces copious perspiration. It can be beneficially mixed in hot water and taken as a drink in colds and chills.The oil is obtained by fractional distillation of the leaves, flowering tops and twigs of the plant.

This emulsion is prepared by mixing oil in hot water. The emulsion is used as a gargle for sore throat. The oil exhibits antibacterial activity.

The flowering tops and leaves have a camphor-like odour, which induce copious perspiration. They are used for vapour baths in rheumatism.

Heart Stimulant: A few drops of rosemary oil are taken internally as a heart stimulant. A five per cent tincture prepared by mixing oil of rosemary in alcohol, is used as a circulatory and cardiac stimulant.

Dandruff: Shampoos and hair lotions containing the pure extract of rosemary herb rejuvenate the scalp and hair while preventing dandruff and premature baldness.

A lotion from leafy rosemary branches can be prepared by simmering them in water for 30 minutes before straining and cooling. It can be used as the final hair rinse.

Fresh tender tops are used for garnishing and flavouring cold drinks, pickles, soups, and other foods. Its leaves are used as a condiment. Dried and powdered, they are added to cooked meats, fish, poultry, soups, stews, sauces, garnishing, preserves and jams.

Written by Sona Tandon - Registered Nutritionist with a background in Ayurveda and  herbs. I specialize in hormone  and have 15 years of experience in healthcare, and is the owner of alternativemedicineathome and co-owner of soma vitality wellness, provides my coaching, online courses and private consulting via https://www.somavitalitywellness.com/

Soma Vitality Wellness is a integrative clinic with expert health practioner specializing in hormone health and gut health. These practioner design integrative treatment plans that can help you balance your hormones through nutrition, lifestyle coaching, herbs and supplements. You can rest assured that when you take a consultation, you will get the care you deserve. Why not book a 15 minutes free consultation to see if its right fit for you?