Arjuna is a dense tree attaining a height of 20 to 27 metres. It has long, cone-shaped round leaves and white bark which gives out a milky juice when cut. Mainly, the bark of the tree is used in medicines.

Its bark has been described as a cardiac tonic. It is recommended to use as as a decoction with milk and water.

The tree is indigenous to India. It is found throughout the sub-Himalayan tracts. It grows chiefly along water channels or marshy belts. The bark contains unusually large quantities of calcium. 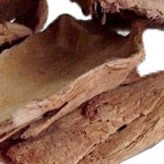 The bark of the Arjuna tree is a cardiac stimulant and has cooling and tonic effects. It is useful in arresting secretion or bleeding. It helps to relieve fever.

It is also useful in removing calculi or stones formed in the urinary system; in promoting flow of bile; and in the healing of wounds.

The bark and preparations made from it are known to have a marked stimulant action on the heart. The practitioners of Indian system of medicine use them in conditions of cardiac failure and dropsy.

Some practitioners of modern medicine believe in its stimulant effect on the heart and use it as a cardiac tonic. As a heart stimulant, either a decoction of the thick portion of the bark made with milk should be taken every morning on an empty stomach or its powder, in 0.75 to 2 grams doses, should be used with milk and jaggery.

In Ayurveda, the bark of the tree is considered beneficial in the treatment of asthma. According to this system, a fine powder of the bark is made and stored in a well-corked bottle. It is given to the asthma patient sprinkled on porridge or pudding mage with milk and rice (Kheer) .

The bark of the tree helps the bones to regain their strength after a fracture. The powder of the bark can be given with honey.

A decoction of the bark taken in doses of 15 to 30 grams may relieve patients of diarrhea or dysentery.

An ointment made by mixing the bark and honey applied over the affected area, can treat acne successfully.

The juice of fresh leaves of the tree can be used beneficially in earache. Ashes of the bark is also prescribed in scorpion stung. The decoction of the herb is used as an astringent for cleaning sores, ulcers and syphilitic sores.

Aphrodisiac: The powder of the bark is an effective sex stimulant, if taken with milk regularly over a period of time.

Written by Sona Tandon - Registered Nutritionist with a background in Ayurveda and  herbs. I specialize in hormone  and have 15 years of experience in healthcare, and is the owner of alternativemedicineathome and co-owner of soma vitality wellness, provides my coaching, online courses and private consulting via https://www.somavitalitywellness.com/

Soma Vitality Wellness is a integrative clinic with expert health practioner specializing in hormone health and gut health. These practioner design integrative treatment plans that can help you balance your hormones through nutrition, lifestyle coaching, herbs and supplements. You can rest assured that when you take a consultation, you will get the care you deserve. Why not book a 15 minutes free consultation to see if its right fit for you?